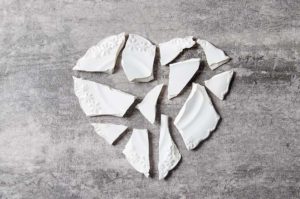 Quite often in my therapy sessions clients will use metaphors to describe their experiences, providing insights that words don’t quite capture.

This happened recently when a client began telling me her thoughts of therapy,  likening it to Kintsugi, a tradition in her Japanese culture that involves putting broken pieces of pottery together again using precious metals such as gold. In essence, this Japanese art encourages us to see potential for beauty in putting the broken pieces back together. In this way, every break is unique and instead of attempting to restore it to it’s former state, the ‘scars’ become part of the design making the object more precious than before. Therefore, an item’s beauty is in its repair, taking on a more complex and  treasured look once it has undergone the process.

In using this metaphor, it allowed my client to feel that in repairing the parts of her she deemed ‘broken’ she was in fact creating a more unique and resilient version of herself.

I liked the metaphor, but it didn’t really mean much at the time.

Even more recently, another client told me how her son commented on her sometimes turbulent relationship with her partner…’he said that we were like a broken plate…every time we break up, the plate breaks into more and more pieces’. It was then that I remembered the metaphor of Kintsugi.

This relationship had been a major focus in our therapy and my client had gone to great lengths to look at parts of herself that were often very challenging. It takes great courage to do this; to hold mirror up to ourselves. Although her relationship at times felt ‘broken’, what she had learned about herself and her partner in therapy had allowed for greater overall awareness and growth. I offered the metaphor of Kintsugi.

When we next spoke, she told me that this metaphor had completely reframed how she saw her relationship, flipping it on its head. Instead of seeing the cracks as damage that couldn’t be repaired, they had in fact been opportunities for increased awareness and making good. Seeing her relationship through this lens was a powerful reminder that although there were cracks, the process of repair was producing a newer, more resilient version than before.